Sharks are boneless fish whose bodies are reinforced with cartilage. They can be found in all oceans, from coral reefs to open ocean habitats, with over 500 species in total. The Lamniformes are an order of sharks also known as mackerel sharks, possessing two dorsal fins, an anal fin, five gill slits, eyes without nictitating membranes and a mouth extending behind the eyes. As part of this order, the great white shark (Carcharodon carcharias) became well-known (and unfortunately feared) through Peter Benchley’s novel, Jaws, which was transformed into a cinematographic nightmare by Steven Spielberg in the late 70s. With other predatory shark species of the order Carcharhiniformes like tiger (Galeocerdo cuvier) and bull sharks (Carcharhinus leucas), the great white shark still has a negative reputation as a ‘man-eater’; however, none of them is thought to actively hunt humans. In fact, many incidents happen through sharks mistaking a swimmer or surfer for their preferred prey. Predatory species are often the focus of cage-diving activities, where these animals can be safely encountered in their natural habitat.

The largest fish on Earth is the whale shark (Rhincodon typus, from the order Orectolobiformes, or carpet sharks). In the same way as large baleen whales, it feeds solely on krill and fish larvae, which makes whale sharks a popular species for divers and snorkellers around the world. No cage or safety net needed!

Just like sharks, rays (Batoidea) are part of the suborder Elasmobranchii (cartilaginous fish) with a distribution from the warmer climate of the Tropics to the Arctic/Antarctic Sea. However, only a few ray and skate species live in the open ocean as they usually prefer shallow water. Some live in estuaries and even lakes. Being adapted to a benthic (bottom dwelling) habitat, their bodies are flat and show a triangular, round or diamond-shaped silhouette with enlarged pectoral fins and gill slits on top of the animal. The most prominent and impressive species are eagle rays such as manta (Manta birostris/ alfredi) and devil rays (Mobula sp.), which can reach a width of seven and five metres, respectively. They can be encountered in tropical regions and are easily habituated to human presence, which makes them popular wildlife to interact with. 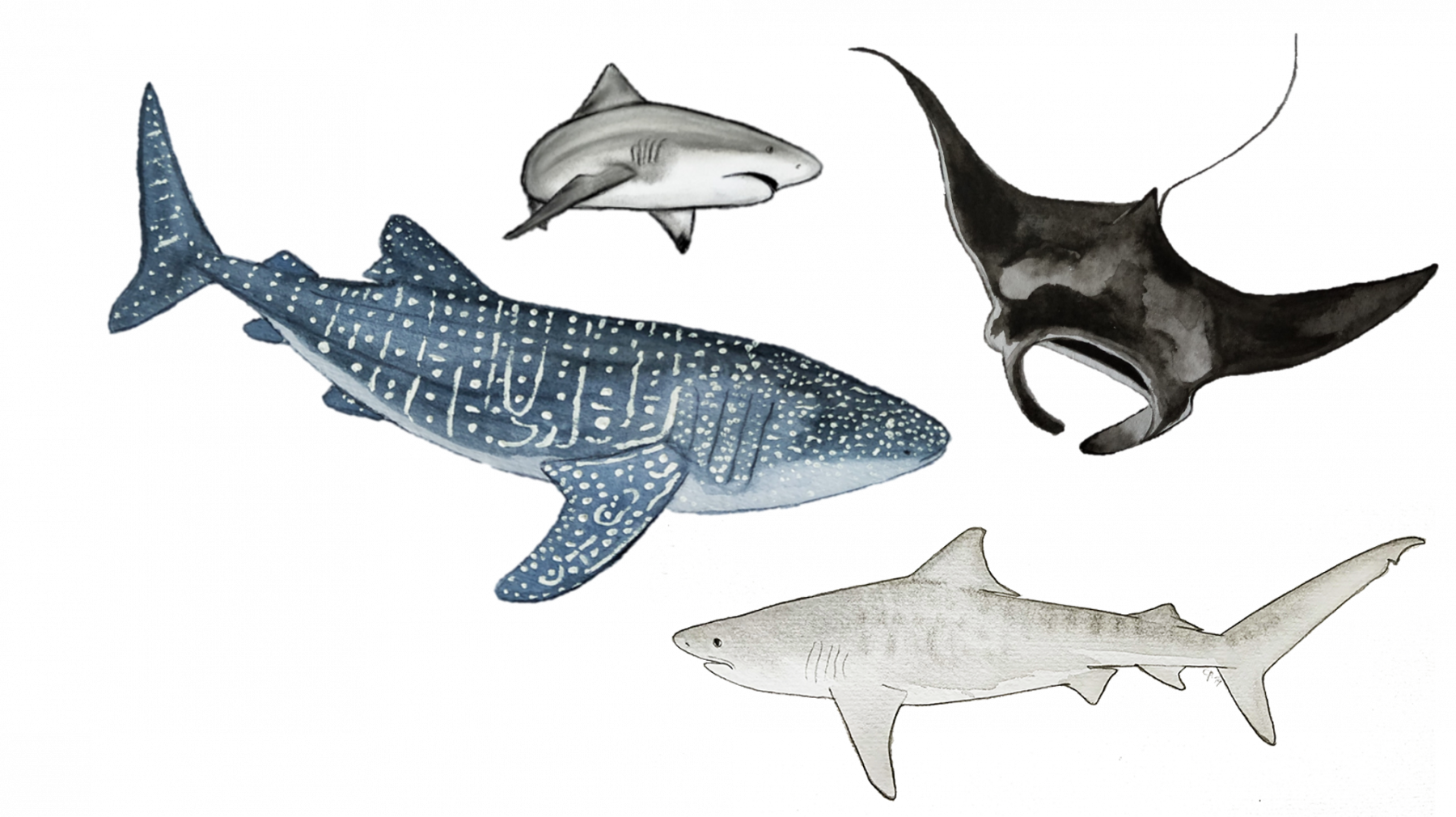 However, some rays and skates are not entirely safe for close interaction. Stingrays possess one or more barbed stingers on their tails which are used for self-defence when they are feeling threatened, e.g. when people step on them by accident while wading in shallow waters. Stingray City, Cayman Islands, is a hotspot for encountering southern stingrays (Dasyatis americana) in their natural environment and where people can interact with the animals on a daily basis. However, as with any human-wildlife interaction, incidents can occur and it is always advisable to be cautious.

As the name indicates, whale sharks are pretty large fish. More accurately, they are the largest fish on Earth – most individuals grow to between 4 and 10 metres long! Whale sharks are also, without doubt, one of the prettiest fish around. With their grey-blue coloured skin, white patterning, and impressive size, they are extremely distinctive sharks (the second largest fish is the basking shark which comes in a light brown). As filter-feeders, they are only a threat to the myriads of plankton and nekton around them on which they like to feast.

Whale sharks are highly migratory and mobile, with their preferred habitats being tropical and warm temperate; however, most of them roam within the same coastal areas. Researchers link their movements with feeding but also as seeking preferred water temperatures or following ocean currents. Further, scientists genetically distinguished two main sub-populations: one in the Indo-Pacific (from Western Australia to Mozambique) and the other in the Atlantic Ocean; however, other hot spots are around the Philippines, the Seychelles and Yucatan, Mexico.

Whale sharks are k-strategists, which means that they are slow growing, late reaching maturity and live long lives. Unfortunately, these features contribute to the current status of whale sharks being threatened with extinction, as many individuals are being killed either through being hunted, ending up as bycatch or due to vessel strikes.

Today, over 8660 individuals have been identified and each one of them is an important contributor to local marine-wildlife tourism industries; it is believed that tourism based on whale sharks is generating at least US$42 million annually. Whale sharks are mainly experienced during swim-with programmes (SWPs) in which tourists are taken out to the targeted species by boat in order to swim and interact with one or more individuals. Whale sharks are among the most popular species for in-water interactions due to their docile nature and their sheer size. Most people need a snorkel and fins to keep up with the gentle giants, but Scuba diving is also an option for experiencing whale sharks, as long as the divers’ bubbles are not stressing the animals.

In general, whale sharks should always be given plenty of space; mainly because the animals should never feel stressed in our presence and secondly for our own personal safety. The tail of a whale shark is massive and close approaches as well as physical contact with the animal should be avoided at all times (three metre minimum distance). If you are unsure about approaching a whale shark, take a closer look at its behaviour. If it is swimming calmly you are ready to go. However, if it displays any signs of banking, diving or threshing the shark is clearly stressed and should be left alone.

Whale shark tourism is managed through legislation in Australia, Belize, Ecuador, Mexico and St Helena Island (UK). Other locations use voluntary codes of conduct, and abiding by these is critical if the operations are to remain sustainable. In general, every single visitor can help to contribute to viable whale shark experiences by respecting the animals’ needs.

© Courtesy of Parks and Wildlife Service at the Department of Biodiversity, Conservation and Attractions, Western Australia

Quiros, A. L. (2007). Tourist compliance to a Code of Conduct and the resulting effects on whale shark (Rhincodon typus) behavior in Donsol, Philippines. Fisheries Research, 84(1), 102–108.